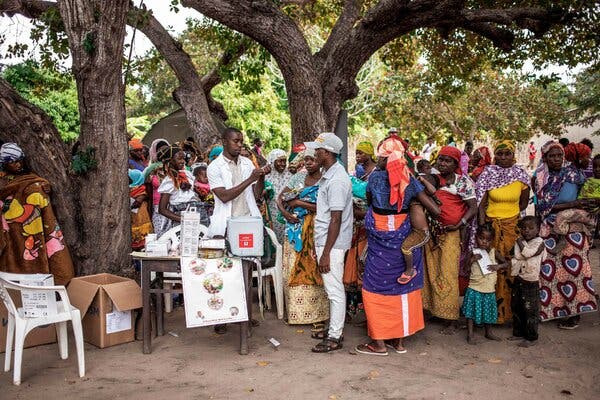 By restoring funding cut off by his predecessor, President Biden ended four years of what abortion rights advocates called a concerted assault on women’s reproductive health in the developing world.

When President Donald J. Trump scrapped tens of millions of dollars in aid to women’s health care providers around the world four years ago, the Family Planning Association of Nepal was forced to dismiss more than 200 people and close clinics in at least four parts of the country, one of Asia’s poorest.

Family planning education and birth-control distribution slowed or stopped in Nepal, which relies heavily on American financial assistance for public health programs. While abortion is legal in the country, the options for safe procedures were abruptly narrowed.

“We couldn’t provide contraceptives to needy people,” said Subhash Shrestha, the association’s acting director. “Because of this many couples failed to control births. They were forced to give unwanted births.”

His group lost $5.5 million in aid, part of Mr. Trump’s promise to anti-abortion activists in the United States, who had exhorted him to revive a Reagan-era rule known as the Mexico City Policy and by its critics as the Global Gag Rule.

The rule, first announced in 1984 during a United Nations population conference in Mexico City, bans American aid to groups that offer abortions or abortion counseling, even if those services are not financed by U.S. tax dollars. Ever since, Republican administrations have enforced the rule, and Democratic administrations have rescinded it.

But under Mr. Trump the scope of the rule was greatly expanded, effectively denying aid to groups that provided a range of other health services, including H.I.V. medicine and tuberculosis treatment, in some of the world’s most deprived places. He also invoked what is known as the Kemp-Kasten Amendment, another Reagan-era measure, used to deny aid to any group that the president determines to have supported forced abortion or involuntary sterilisation.

Under that measure, Mr. Trump terminated aid in 2017 to the United Nations Population Fund, the leading provider of family-planning services, although no evidence had been found that the agency, known as UNFPA, ever engaged in such activity.

With executive orders issued Thursday, President Biden revoked Mr. Trump’s enforcement of the Mexico City Policy and Kemp-Kasten Amendment, restoring the aid and ending four years of what abortion rights advocates called one of the most concerted assaults on women’s reproductive health in the developing world.

“The return of the United States as a major donor to UNFPA at this challenging time sends a message of hope to vulnerable women and girls everywhere,” said Dr. Natalia Kanem, executive director of the U.N. agency, which operates in more than 150 countries. It lost nearly $70 million in U.S. funding in 2017.

For Mr. Shrestha and others on the front lines of threats to women’s health in Asia, Africa and Latin America, Mr. Biden’s action was greeted with elation and relief.

“For us this has reopened the door of opportunity to continue our work in family planning and safe abortion,” Mr. Shrestha said.

Mr. Biden’s action came at a time when Nepal, a country of about 30 million people where nearly a third of the population is younger than 16, was facing a resurgence of risks to women’s health, which had been improving until Mr. Trump revived the anti-abortion rule. The global coronavirus pandemic has only made things worse.

In Nigeria, Africa’s most populous country, where 10 percent of the world’s maternal deaths occur and where more than 1.8 million unsafe abortions are believed to be performed annually, Mr. Biden’s actions were major news.

“You can’t imagine my excitement,” said Effiom Effiom, the head of the Nigeria chapter of MSI Reproductive Choices, a provider of women’s health services, including abortion, in 37 countries. “The gag rule was bad enough, but Trump went further, to expand that gag rule.”

In 2016, when the MSI chapter in Nigeria was still receiving American government funding, it helped to avert about 799,000 unintended pregnancies and 313,000 unsafe abortions, Mr. Effiom said. In Nigeria, where abortion is illegal in almost all cases except when the woman’s life is in danger, MSI’s focus is on providing access to contraception and family planning advice.

Since the denial of funding in 2017, he estimated that the chapter’s workers had failed to reach 5.3 million users of family planning, failed to avert 1.1 million unsafe abortions and failed to prevent 16,000 maternal deaths.

“What Marie Stopes would have done with U.S. government funding, at the pace it was going, was just going to be enormous,” he said, referring to MSI.

In Latin America, where there are high rates of poverty, teenage pregnancy and domestic violence, the impact of the Trump administration’s anti-abortion policy has been devastating, women’s health advocates said, with hundreds of thousands of women affected.

“The damage to the world’s women and girls hasn’t yet been fully measured,” said Giselle Carino, chief executive of the International Planned Parenthood Federation Western Hemisphere Region, which works on reproductive health across Latin America.

Ms. Carino said her organisation had lost $5 million in funding under the Trump administration, forcing the dismissal of 700 health care workers and the halt of many services, ranging from providing contraception to Haitian migrants in the Dominican Republic to tackling the Zika virus in El Salvador.

In all, Ms. Carino said that more than half a million women may have been affected.

“What the rule really does is play politics with women, girls and the most vulnerable populations,” she said. “It uses them as target practice.”

In Colombia, Marta Royo runs Profamilia, an organization that offers contraception, health care and support for women to access abortion, which is legal in the country under limited circumstances.

With funding from the United States, the group had launched a program to provide sex education to displaced young people, including vulnerable Venezuelan migrants as well as Colombians forced to migrate internally because of violence.

But with the anti-abortion rule, the program was stopped abruptly, with the organization receiving only half the $2 million promised, leaving 60,000 people without access to reproductive information and care, according to Ms. Royo.

These young people “are left totally exposed,” she said. “Young girls, we know that they put their lives at risk, they seek out clandestine abortions or they end up bringing to term pregnancies that put their lives in danger.”

While Mr. Biden’s action rescinding the anti-abortion rule had been widely expected, it still provoked an angry reaction among abortion opponents in the United States.

The Family Research Council, a leading anti-abortion group that had embraced Mr. Trump’s policies, said Mr. Biden was “forcing taxpayers back into a partnership with the overseas abortion industry.”

Critics of the anti-abortion rule say that rather than reducing the number of abortions around the world, it created the opposite effect. By restricting access to contraception, reproductive care and sex education, unwanted pregnancies and abortions have risen.

“If they were looking to limit abortions,” said Ms. Carino, the Planned Parenthood executive, “what they actually produced was more abortions.”